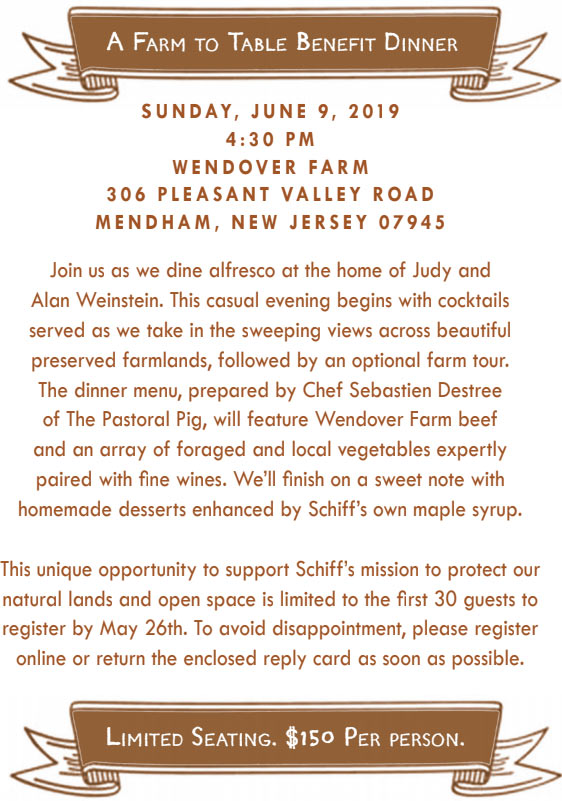 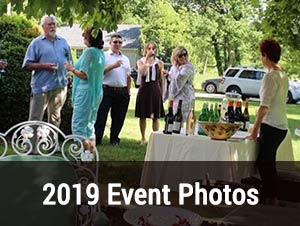 Our Mission
The Schiff Natural Lands Trust, Inc., is a member-supported, community-based, non-profit organization dedicated to preserving open space, serving as a model of environmental stewardship, providing educational opportunities, and improving the ecological value of natural areas using best management practices. We maintain an active nature center and offer a variety of programs open to the public for environmental education, research and passive recreational activities consistent with the preservation of natural areas.

Our Intention
To host and enjoy an interactive, decedent curated dinner while cultivating relationships & raising funds for Schiff. The intimate dinner party where hand selected guests enjoy a local and foraged three course meal was prepared in house by our most talented and generous chef. The specially selected wines offered were to compliment the menu. We thank all of our attendees for a wonderful evening.

The historic Wendover Farm sits on 33 acres of total tranquility with hay fields in Farmland Preservation. Alan Weinstein, a long time friend of Schiff and current trustee, and his wife Judy graciously opened their home and grounds for this delightful evening. A long, scenic drive leads to the existing gracious vintage home with a large country kitchen, lovely patio area, and open porch perfect for entertaining our guests. Adding to the serenity of patio setting are the expansive field views, and adjacent greenery, flower and vegetable gardens, and light piano music offered by Pianists, Laurie Burke and Catherine Callahan. Alan provided our guests with a private tour of the farm grounds and outbuildings prior to dinner. We thank the Weinsteins for hosting the event. 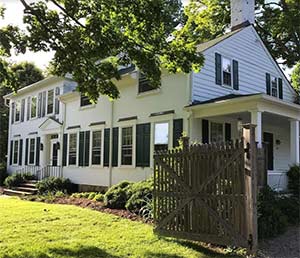 Sebastien Destree is the owner of The Pastoral Pig in Flanders, NJ - a craft butcher shop which sources exclusively grass fed and pasture raised animals. All butchery is done on premises at the store, and all products are made in-house with a focus on high quality, sustainably sourced ingredients. Sebastien is originally from outside Paris, France, where his love of artisanal food began. He started out working as a waiter, prep cook and maître d while putting himself through school. Sebastien eventually moved to the United States, working again in restaurants in New York City and eventually attending Le Cordon Bleu College of Culinary Arts in Chicago, Illinois. After culinary school he had the opportunity to work for several Michelin starred restaurants including the acclaimed Jean-Georges and Gilt restaurants. During this time Sebastien developed a deep appreciation for sourcing and using high quality ingredients, and also started to learn more about the benefits of meat "raised right." He went on to complete an apprenticeship for whole animal butchery at Fleischer's in Kingston, New York and shortly thereafter opened The Pastoral Pig. If you ask Sebastien what his favorite meal is, he'll probably tell you a great baguette, country pate or saucisson, and a glass of red wine! We thank Sebastein for his time and talented services.

All of the fresh foods for the menu were curated within ten miles of the Wendover Farm. Many items were graciously donated by local farms; Alstede Farm in Chester donated field greens, spinach, and radishes and Wendover Farms, our hosts, donated the cuts of beef, rhubarb, and home made lemon balm iced tea. Other contributions included foraged mushrooms, edible flowers, and ramps for biscuits and ramp jelly from our Executive Director, Dorian von Aulock, ramp and cheddar biscuits prepared and donated by volunteer, Lauren Vasquez, and sweet scone with strawberry rhubard compote prepared and donated by trustee, Marissa MacDonnell featuring Schiff's own maple syrup. Wine selections were provide by Adelphia wine in Bernardsville. We thank all the food and beverage contributors.